Emirates General Petroleum Corporation 'Emarat' continues its efforts aiming at preserving the environment and protecting the health and safety of the community, through its support and enhancement of the services being provided to the customers which are aimed at facilitating recycling processes, the use of biodegradable bags, and recycling paper at its service stations.

Ban Ki-moon urged investors today to lend their support to sustainable development initiatives to deal with climate change and provide efficient energy solutions around the world.

“In these times of austerity and economic uncertainty, public sector efforts alone will not be sufficient,” Mr. Ban said in his message to participants at the…

The First Saudi Consumer Protection and Social Responsibility Forum will be launched by the Ministry of Commerce and Industry of the Kingdom of Saudi Arabia in association with Knowledge Corporation. The Forum, which will focus on the entire trading process will be held at the Hilton,…

Brother Gulf, a leader in home and business IT peripherals that focuses on the ‘Customer-First’ approach, was presented with the ‘Corporate Social Responsibility’ Award by ICDL GCC Foundation, the governing body and the certification authority of the International Computer Driving License program in the Gulf States and Iraq, during…

Medi-Compass, a unique concept on wellness, is launching a set of solutions to assist you achieve your CSR goals aligning the objectives of doing good as well as extending your Brand.

This combination ensures that there is clear ROI on the money you spend.

We have two focus areas in this respect:

FOCUS ON YOUR BIGGEST ASSET ~ Your Employees: Its all about the people we have in our organization. This is a well known fact that happy and healthy…

Al Qasba, a premier leisure destination in Sharjah has introduced a smoke free policy and will create smoke free zones to help maintain a clean air environment for all those visiting its many restaurants, coffee shops, art galleries and attractions.…

PepsiCo has launched an integrated Social Responsibility campaign in partnership with the World Assembly of Muslim Youth (WAMY), through which PepsiCo aims to establish a national presence in the field of humanitarianism as confirmation of its commitment to providing assistance…

Giving a unique chance for Omani youth to regain missed educational opportunity BankMuscat, one of the leading financial services providers in the Sultanate, announced their ‘Jisr Al Mustaqbal’ (Bridge to the Future) youth scholarship programme, as per the directive of His Majesty Sultan Qaboos to provide relevant educational and training opportunities for the…

Emirates Post has announced it has donated used PCs to Dubai Municipality’s PC Refurbishment Centre as part of its corporate social responsibility. The PCs will be given to needy educational institutions in the UAE and abroad.

Knowledge Oasis Muscat (KOM) recently unveiled its ‘KOM in Green’ initiative dedicated to waste paper collection and recycling. The initiative will conclude on January 11 under the auspices of Mohammed bin Salim bin Said al Toobi, Minister of Environment and Climate Affairs.
"As the Sultanate's flagship technology park, we recognise our…

Kingdom keen to back business community in CSR activities

An overwhelming majority of people (90 percent) who responded to a recent survey in Saudi Arabia believe that the government is willing to support the business community in corporate social responsibility (CSR) activities.

The study also revealed that limited financial resources, lack of experience and know-how are the main reasons why some government organizations in Saudi Arabia are not involved in CSR.

The National Commercial Bank (NCB), as…

Qatargas has reiterated its commitment to sustainable development. It is today the largest LNG producing company in the world, with an annual LNG production capacity of 42 million tons per. It delivers LNG to its customers around the globe, from its world-class facilities in Qatar. 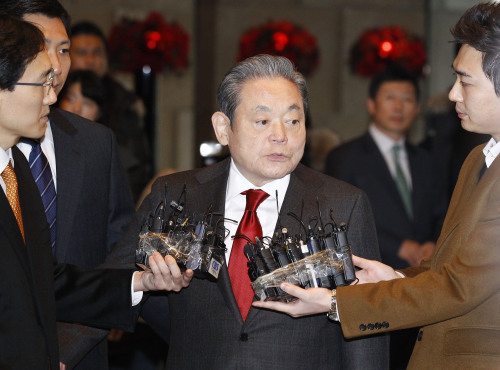 Samsung Group chairman Lee Kun-hee said the country’s largest conglomerate will concentrate on corporate social responsibility in 2012 at its New Year’s greeting at the Shilla Hotel in Seoul on Monday.

“We will take full social responsibility as…

Ahlibank has outlined its expanded corporate social responsibility (CSR) strategy for 2012, focusing on a key social theme each month as well as better financial planning.

Expanding away from the private sector's usual Ramadan focus, the bank will be concentrating on safer driving in January, breast cancer in February, saving water in March, exercise in April, smoking in May and global warming in June.

The Emirates Environmental Group (EEG) ushered in the New Year on a green note by entering into a Cooperation Agreement with Al Hilal Bank, one of the UAE's leading Islamic banks, for a year-round Tree Planting Programme in the country.…

A delegation representing the Stanford Graduate School of Business (Stanford GSB) from the US recently visited RasGas headquarters on an educational visit aimed at gaining a greater knowledge and understanding of Qatar’s economy, history and culture as part of their curriculum to develop global management skills.
RasGas is always happy to host such visits and…

If Qatar succeeds in its quest to become a leading global sustainability laboratory, Qataris will have inventors likeHashim Al Sada to thank. The 26 year old Qatari, who runs science camps, makes the point that despite its deep reserves of oil and gas, the little peninsula…