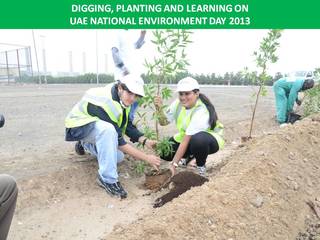 How SMEs can benefit from CSR

The session, entitled Corporate Social Responsibility for Small and Medium Enterprises, focused on providing SME’s with practical knowledge and guidance to align responsible business practices with…

Dubai real estate market has recently shown an escalation in residential, office, retail and hotel projects, these recent trends and developments in the market have highlighted the future outlook and projections of the demand and supply in Dubai.

One such leading player "Pacific Ventures Ltd" a…

With support from and in collaboration with the AlKhobar District Municipality and Giving Hands Volunteers, including e-support from AlKhobar.net, Rawabi Holding went on a second clean up round on January 24th 2013 as part of a joint and sustained environmental awareness campaign to clean the main roads in the city of AlKhobar involving volunteering Rawabi Holding Employees, students…

Al Fahim Group announces implementation of a special employment strategy in line with the initiative of His Highness Sheikh Khalifa bin Zayed Al Nahyan, President of the UAE to enhance the participation of UAE nationals in the labor market, "Absher" which will form the cornerstone of the UAE government's Emiratisation program.…

Alpen Capital partnered with Dubai Cares to unveil a very limited miniature structure of the world's tallest monument - The Burj Khalifa - called the "Burj of Giving", at a special ceremony organized in partnership with The Ara Gallery and Emaar Properties PJSC.

Palm Utilities, a Dubai World company, has been awarded the Dubai Chamber CSR Label, in recognition of its solid commitment to CSR and sustainability and its ongoing efforts to optimize its resources primarily on providing the best environmentally friendly and sustainable energy solutions in line with the highest international standards.…

Building on its success in 2012, the Zayed Future Energy Prize, launched in 2008 and managed by Masdar, will award five distinct categories during its 2013 awards ceremony.

The initiative represents the vision of the late Shaikh Zayed bin Sultan Al Nahyan, founding father of the UAE, who championed environmental stewardship…

Imdaad, a provider of integrated facilities management solutions in the GCC, has announced its support as Silver Sponsor of the "Maharati Program - Winter 2012", a unique initiative that aims to equip Emirati teenage students with different skills needed to enhance their personal development and technical capabilities.…

Recycling machine off to a flying start

John Irvine, the managing director of the Lebanese waste management company averda, talks about ReVa, a reverse vending machine. The company, which started in Beirut 30 years ago, entered the UAE in 2006. The recycling machine, co-sponsored by Tecom Investments and averda, was launched in the first week of December.

What does the machine do? Where are these installed?

Users can exchange plastic bottles and aluminium cans for Air…

Seven major organisations were presented the Dubai Chamber CSR Label during a ceremony held at the Dubai Chamber of Commerce and Industry premises on Wednesday. The awardees were honoured for their efforts to become leading businesses in corporate social responsibility and sustainability.

Deutsche Bank's Middle East Foundation announced today its partnership with Save the Children by supporting its Animate-It Workshops project in United Arab Emirates and the Food Vouchers System Initiative in Yemen.

In-line with its strategy to support the local communities and its commitment to corporate social responsibility, Samsung Electronics Levant, a global leader in digital media and digital convergence technologies, organized a volunteer day for Samsung employees and others to donate a day of their time to renovate the Insan School.…

The National Bank of Abu Dhabi (NBAD) launched their first 'Sustainability Week' to highlight, promote, and educate the Bank's staff about living and working sustainably.

Over five days in October, employees were invited to learn about saving power and water, managing their money, keeping fit and…