Dewan Architects & Engineers, one of the region's leading architectural and engineering consultancy firms, is pleased to announce that it joined the United Nations Global Compact (UNGC) initiative in November.…

The Ras Al Khaimah Free Trade Zone, popularly known as RAK FTZ, is looking ahead confidently to achieve record growth this year and moves into 2012 on strong positive note, its top official said.

The free trade zone recorded 28 per cent year-on-year growth in first three quarters of 2011 and registered 1,953 companies by December 20, exceeding the annual…

National Geographic Al Arabiya magazine and the internationally renowned educational initiative '1001 Inventions' have formed a strategic alliance to raise awareness of the Middle East's scientific and cultural heritage, through the development of a number of high quality…

The report for 2010, which has been developed using the Greenhouse Gas (GHG) Protocol calculates, measures and presents Aramex’s global greenhouse gas emissions. The data,…

Branching out to youth

It is barely lunchtime and six students from Rawafed Private School have already watched millions of dirhams flash before their eyes.

For the past few months, Emirates NBD has been inviting a handful of prospective university students to its branches to spend a few hours getting to know what it takes to work in a bank.

Khidmah is to offer a year’s worth of planned preventative maintenance (PPM) services for two offices of the women and children’s shelter, Ewa’a, in Abu Dhabi, as part of its corporate social responsibility strategy.

During their third round of the CSR Label awarding ceremony, the Dubai Chamber of Commerce and Industry honoured three Dubai-based companies for their contribution to adopt and lead best corporate social responsibility and sustainability practices in their organisations.

du, QBG and the Nail Spa are the three companies which were bestowed with the Dubai Chamber CSR Label during a special…

Best practices are key for businesses in promoting transparency and sustainability and gaining of confidence of investors and stakeholders, according to top global and local corporate governance experts.

Global experts outlined promising features of excellence at the latest Dubai Dialogue, a leading biannual conference that promotes CSR, which was organised by the Dubai Chamber of Commerce and Industry’s Centre for Responsible Business.

With its aim to find the way…

BankMuscat, as part of its Corporate Social Responsibility (CSR) initiatives, donated 200 mobility aid equipment, including wheelchairs, to physically challenged citizens through Oman Association for the Disabled (OAD). The gesture benefiting citizens with special needs is aimed at helping them overcome challenges and integrate themselves with the mainstream…

Around 60 members from Jabal Natheef community gathered today to clean the streets surrounding their homes, schools and work area. This cleaning campaign was launched as part of the" Yalla Shammer" Initiative, organized by Ruwwad's Youth and supported by the British Council.

"The Jabal is not clean due to simple math. There are 62 garbage bins in Natheef used by almost 75,000…

Abu Dhabi Airports Company (ADAC) and DFS Abu Dhabi have introduced a major initiative that is set to benefit industry charity Hand in Hand for Haiti. The companies called the move “an industry first for duty free”.

It involves a new dedicated raffle programme with all proceeds being donated to the project, and all costs are being covered by ADAC and DFS. This will… 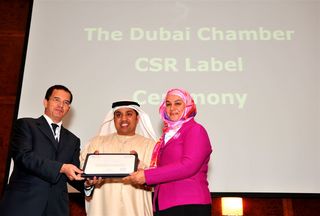 This latest recognition comes in…

Gilbert Rustom has been appointed by AccountAbility, the international corporate responsibility organization, to serve as Regional Head for the Middle East, Africa and Asia. In his new role, Mr. Rustom will be responsible for client management and business development within…

A supermarket chain has launched a new drive to support local farmers.

Alosra Supermarket on Budaiya Highway is partnering with Bahraini farmers through its "Think Local" initiative.

It will offer produce from local farms, supporting their business and the economy in the process.

The scheme also has environmental benefits, since it reduces the need for foreign…

Under the patronage of the Lebanese Prime Minister, His Excellency Najib Mikati, Cisco, the European Investment Bank (EIB), and Riyada Enterprise Development (a member of the Abraaj group) jointly announced today the launch of the US$50 million Lebanon Growth Capital Fund which will provide long-term capital and institutional support to small and medium enterprises (SMEs) in Lebanon.

Grameen-Jameel Is Strengthening Microfinance in the Middle East

Alex Counts is president, CEO and founder of Grameen Foundation, and author of several books, including Small Loans, Big Dreams: How Nobel Prize Winner Muhammad Yunus and Microfinance are Changing the…