Corporate Social Education (“CSE”) reimagines how we educate our workforce to become change agents in society. CSE creates the bridge to address non-cognitive educational gaps that ends up impacting the workplace and society as a whole. Examples are: life skills, leadership training, soft skills etc. Using the workforce, CSE adds value to the… I know I am not the only person asking this question but if we are a fan of Covey and we "begin with the end in mind" , is it not true that both CSR and  Corporate Social Entrepreneurship ( CSE) have a common end game of:

1. Addressing a societal concern or issue

2. Running a successful business with an entrepreneurial sustainable spirit 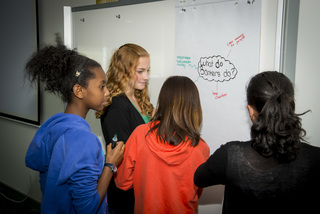 We are doing our part in growing future leaders who will spearhead CSR in the future through our weekly column with Gulf News. Here's the first column: http://gulfnews.com/life-style/education/great-leaders-must-fail-forward-1.1066908

The Growing Leaders Foundation had the distinct honour of doing several leadership workshops with  teachers using CSR leadership trained volunteers before they left for their summer break.

During the three hour sessions, both the facilitator, volunteers and the teachers explored their unique gifts and talents in order to have a better understanding of “who am I” and “why am I here”, very important for teachers since they are the only profession that touches the future. The key to a successful CSR strategy is in the hands of your employees! Your employees are your key asset and an obvious starting point for CSR efforts. Having an excellent community involvement programme is pointless if your employees are dissatisfied due to poor pay or conditions. Employees rate 'interesting and stimulating work'… CSR is not corporate philantrophy

It’s hard to find a major company that isn’t talking about, writing about or reporting on how they take their corporate social responsibility seriously. However, many companies make a common mistake of misinterpreting corporate philanthrophy for CSR activities.