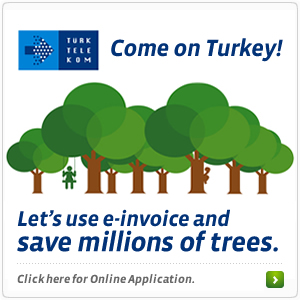 The CEO of Türk Telekom, K. Gökhan Bozkurt, mentioned that great changes have been made in the lives of young people through the corporate social responsibility (CSR) projects of Türk Telekom.
A newly released documentary movie titled “Türkiye’ye Değer Hikayeler” (Stories of value to Turkey) tells the stories of nine young people who reached success or opened new doors in their lives with the help of the CSR projects of Türk Telekom. The movie tells the stories of nine different note worthy young people who either reached academic goals through the education they received from Türk Telekom Schools, got acquinted with championships in Türk Telekom’s Amateur Sport Clubs or even improved themselves with the opportunities that were provided by the technologies at Türk Telekom Internet Houses.

The stories of the nine young people who built their futures with effort and determination and with the support of Türk Telekom’s Türkiye’ye Değer CSR projects, have been documented in a movie called “Türkiye’ye Değer Hikayeler”.

In “Türkiye’ye Değer Hikayeler” , the stories are told of Uğur Fidan and Daham Özgel who grabbed the chance of continuing their studies with the help of Türk Telekom Schools in their regions; Büşra Varol, Hülya Yılancı, Işıl Gençtürk, Güner Yalçın, Furkan Kızılkaya, Betül Özen who became national sportsmen and achieved their dreams in Türk Telekom Sport Clubs and one of the users of Türk Telekom Internet Houses, Naime Durak.

Nedim Hazar, who is well known for his successful works in film and music, directed the movie. CEO of Türk Telekom K. Gökhan Bozkurt made a speech at the press gala of “Türkiye’ye Değer Hikayeler” and said:

“We continue to develop our CSR projects with the aim of creating value for Turkey while enabling the lives of our customers with progressive communication technologies by gaining power from our more than 25.000 employees. As the family of Türk Telekom, we are proud and happy to receive the compensation of our works and efforts through these success stories that are told in “Türkiye’ye Değer Hikayeler”. As the leading communication and convergence technologies company, we feel greater responsibility in creating value in Turkey as much as our responsibilities in empowering the technology infrastructure of our country.”

The ones who made Türkiye’ye Değer Hikayeler

Betül Özen is an 8th grade 14 year old and the student of Çanakkale’s Private İsmail Kaymak College. Lacking one arm since birth, Betül has held on to life with a prosthesis arm and hand since she was five years old. Four years ago, her talent for sports was discovered. Her school principal and teachers witnessed her playing volleyball and sent her to the school’s basketball team. Betül then started to play basketball in Çanakkale’s Türk Telekom Sports Club. Betül plays piano and organ and is also a very good swimmer.

Büşra Varol was born in 1993 in Trabzon. Ever since her childhood she was interested in various sports and her talent was discovered by the coach of Trabzon Türk Telekom Sports Club, Coşkun Gökdemir. Due to her success in local tournaments, she was selected for the National Team many times. Büşra is aiming to win more international medals in the future.

Daham Özgel was born in 1990 in the town of Kızıltepe of Mardin as one of the nine siblings. He continued his education since the 6th grade in the Musa Bey village, a part of Menemen town of İzmir where the family had to move due to financial incapabilities. He completed 7th and 8th grades in Kızıltepe. In 2006 he won the examination of Siirt Türk Telekom Science Highschool. Daham was working in the tomato and cucumber fields and vineyards of İzmir and Mardin in his summer holidays. In 2010 he was awarded a place in the Dokuz Eylül University Medicine Faculty and went back to İzmir this time to have a university education in the town where he used to work as a seasonal labour.

Furkan Kızılkaya was born in Eskişehir in 1986. Furkan who is a 3rd year student of Anadolu University Calisthenics and Sports teaching, continues his sports career in Eskişehir Türk Telekom Sports Club for 17 years. After being introduced at the age of 14 with underwater hockey, a little known sport in Turkey, he started to compete as one of the ten team members. Up until today today, his team has had a great many successes in both Turkey and Europe. Furkan Kızılkaya is now a swimming coach in Eskişehir’s Türk Telekom SC where he used to be one of the sportsmen.

Güner Yalçın was born in the town Borçka in Artvin. He is one of the students of Borçka Anatolian Technical Highschool and is in the 3rd grade. Güner’s judo career started with the support of his sports teacher Umut Aydın who is the coach of Artvin Türk Telekom SC. Güner has won many medals in judo since 2005, coming second in the Balkans tournament and third in the European Judo Cup.

Hülya Yılancı was born in 1995 in the town of Borçka in Artvin. She is also a 3rd grade student in Borçka Anatolian Technical Highscool. Hülya started judo at Yeniyol Primary School. As a sportsman of Artvin Türk Telekom SC, she came first in the Turkey Challenge Tournament, third in the European Challenge Cup and won many local tournaments. Lately Hülya won the gold medal at the 18th Nazım Canca European Judo Challange Cup.

Işıl Gençtürk was born in 1995 in the town of Borçka in Artvin. Currently she is a 2nd grade student in Borçka Anatolian Highschool. Işıl started judo after being discovered by the Artvin Türk Telekom SC coach, Umut Aydın. Işıl continues her judo training in Artvin Türk Telekom SC. Up until today she won various tournaments. Apart from winning many Turkish championships she came 5th in the European Judo Cup.

Naime Durak from Kütahya, is one of the students who is benefiting from one of 967 Türk Telekom Internet Houses in Turkey. As a patient of heart rheumatism Naime has difficulties in moving. It’s forbidden for her to run or to do sports. She spends her spare times in Türk Telekom Internet Houses, doing her homework with the help of the Internet. Naime is a successful student at school.

Uğur Fidan was born in a village called Dinlence of Erciş in the town of Van in 1992. He attended his middle school education by walking the 15 km road between his village and the town center. At the same time he was helping his family by shepherding. With his strong efforts he graduated his school in first place. After finishing Van Türk Telekom Science Highschool he became one of the students of Dicle University Medicine Faculty.