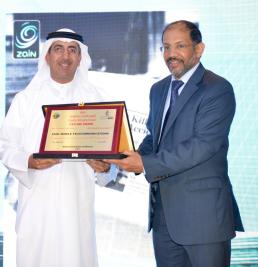 Zain explained in a press statement that this yearly award aims at raising health, safety and environment standards in Kuwait, while recognizing the distinguished contributions of Kuwait's key players in the fields of sustainable business, whether from the private or the public sectors.

The company was awarded with the this year's seventh Excellence award for its highly impactful 'Drive Zain' awareness campaign that targeted social media users and aimed at promoting the responsible use of mobile phones while driving.

Zain, being one of the region's top leaders in the fields of corporate social responsibility and sustainability, expressed its utmost pride in this latest achievement, adding to the long list of achievements it obtained by being a socially responsible company with a clear and firm CSR strategy.

The company's 'Drive Zain' campaign won the award for meeting all the criteria that assured the project would add to the overall quality of HSE in Kuwait. The campaign proved positively effective in improving economic development, improving specific HSE aspects, and improving competitiveness of the establishment in the Kuwaiti market.

Zain explained that the campaign delivered a strong message to its target audience, highlighting the very serious and somber consequences of the improper use of mobile devices while driving. The company recognizes the important role social media plays in the lives of young audiences, and specifically for this reason, the latest campaign was developed using social media language to ensure young people's attention to it.

It is worth noting that, as part of Zain's keenness to be part of events and initiatives that highlight its leading position in CSR, the company recently participated in the eleventh Corporate Social Responsibly (CSR) Summit 2014, held in Dubai, where prominent CSR figures from the private sector across the Arab world travelled to participate in the annual event that is recognized as one of the region's most prominent CSR gatherings.

Zain was awarded the Gold Award for Excellence in Corporate Social Responsibility from the Arab Organization for Social Responsibility in 2012 and 2013. The company was recognized for its series of CSR initiatives and programs, which were assessed to have had a deep and meaningful impact on many groups, institutions, and agencies across multiple communities.