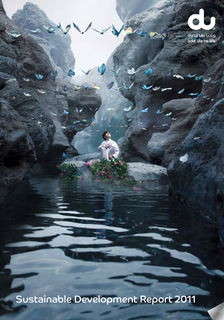 An affirmation of the telecommunications company's position as an advocate and promoter of active corporate citizenship, Du's Sustainable Development report has been established in an attempt to introduce regional standards. It aims to establish benchmarks that fuel transparency, responsibility and accountability for a corporation's actions, while providing inspiration for other companies to self-evaluate and adopt more sustainable development initiatives for the good of the UAE, and the Middle East.

"We are proud to be able to reveal our first Sustainable Development Report. This is a landmark achievement for us, and a demonstration to our peers of how much it is possible to accomplish in just under five years of operations," commented Osman Sultan, CEO, Du. "For us, sustainable development is not merely an optional addition to our way of working; we embraced our role as a conscious corporate citizen before the Du brand was even announced, and it has become a way of life for the corporation since its very inception. Our belief is that everything starts from within, and our efforts towards sustainability are our means to continuously have a positive impact on the world in which we operate. It is our hope that, by releasing this report, we will enourage other corporations to follow suit to the betterment of our community, country and planet."

Sultan continued to say that it is not often that a company as young as Du is chooses to compile a Sustainable Development Report, in anticipation of the legislation to enforce corporate social responsibility on businesses in the UAE which is still in progress. Du has taken a proactive approach in order to be prepared for when such legislations come into being.

He concluded, "We are still learning and we acknowledge that fact. In our report, we are honest and completely transparent; we talk about our successful attempts at becoming more responsible, as well as openly discussing the areas that we hope to improve upon in the coming years. Sustainable Development is still a relatively new concept to this region, and we are still mastering its art to the best of our abilities."

The Sustainable Development Report details the ways in which Du contributes to theUAE's community, environment and people, in addition to in-house schemes for the benefit of its employees. It does this in several ways:

Ongoing programmes such as the Masar Development Programme, Du's graduate trainee scheme, which offers Emiratis in-depth training to allow them to integrate seamlessly into the telecommunications business, by providing them with on-the-job experience and beyond. In addition to this, the company has pioneered a course, called Life Skills, that offers essential vocational skills to university students with no obligation for them to join Du upon completion; this is the first of its kind in the UAE. Du also offers its employees a number of in-house growth and learning programs as well as wellbeing benefits, including a dedicated free clinic for all staff members that provides a comprehensive range of medical services.

Reducing carbon footprint and having the smallest possible impact upon the environment is a key concern for Du, and several initiatives are in place under the heading 'Green Du' to ensure this is the case. Using the UAE's most abundant natural resource - light - Du has established a fully-functioning, solar-powered project on Sir Bu Nair island. The company's fleet uses low-carbon emission vehicles, and energy management controller systems are being installed in more than 100 base transceiver station sites across the country, to cut energy consumption by up to 50% - thereby significantly reducing CO2 and other emissions. Additionally, recycling systems have been established within Du's offices; all paper is recycled by Union Mills, and Du is part of the HP Planet Partners scheme to recycle old printer cartridges. Plastic, aluminium and other recyclables are handled appropriately.

Community-focused efforts work towards reviving and maintaining the culture and heritage of the country, as well as giving back to the UAE in ways that make a difference. Du's Ramadan Mawaed Al Rahman (Iftar tables) are an annual initiative that, in 2011 alone, handed out 90,000 meals to those in need (funded by the telecom itself, as well as by donations made from employees and members of the public). Drop of Life is a successful blood drive that the company holds regularly in support of patients in the UAEthat suffer of the genetic blood disease Thalassemia, in collaboration with Dubai Blood Donation Centre; so far this year, 348 Du employees have donated enough blood through the campaign to benefit more than 1000 people. The company took the campaign one step further by organising a fun-filled 'Open Day' for the children of the centre along with their parents, at the children's edutainment centre, KidZania, in The Dubai Mall. During the fun-filled 'Open Day', kids and their parents were presented with a unique dual offering of entertainment and education. Employees of Du played a major role; actively participating in making the day a success and putting a smile on the faces of all the young patients.

Du encourages the people of the UAE to develop their talents by lending its capabilities to educational institutes. Examples of this are the provision of the Du media lab at Zayed University, supporting the Higher Colleges of Technology Career Centre at Dubai Mens' College, and a partnership with Microsoft's Imagine Cup competition that encourages creativity amongst college students in the field of building smart applications that supports a humanitarian cause. The telecoms company also encourages entrepreneurship through sponsoring Shelter, an enterprise incubation hub at Maraya Art Centre in Sharjah and by supporting the Majid Bin Mohammed Youth Media Award.

Comment by Alex on November 3, 2011 at 1:21pm
Congratulations to du on being the first UAE telco SD reporter!