GE is highlighting its energy sustainability initiatives and commitment to complement the efforts of Middle East governments to manage their ecological footprint at the Arab Forum for Environment & Development (AFED) to be held from November 29 to 30, at the Phoenicia Intercontinental Hotel in Beirut.…

Crescent Petroleum, the Middle East's oldest private oil and gas company, has highlighted the need for responsible companies in the Arab World to develop and adopt environmental policies for sustainable development as part of their growth strategy.

The company has joined as a regional partner…

Panasonic employees and UAE residents gathered at Dubai’s Al Mamzar beach for the 11th edition of Clean-Up Drive 2012. The event was organized under the auspices of the Philippine Consulate General of Dubai, and is part of the global Clean-Up the World initiative from the United Nations Environment Programme (UNEP).

Globally, the Clean-Up Drive engages an estimated 35 million volunteers in 130 countries each year, making it one of the world’s largest community-based…

Green Globe announced re-certification of Movenpick Hotel Deira in Dubai, United Arab Emirates (UAE). Since its opening two years ago, this upscale hotel has demonstrated outstanding efforts and innovation in the fields of operational efficiency and corporate responsibility, marking the hotel group’s ambitious commitment to secure region-wide certification of all its Middle East properties.

“It’s a great achievement for the Movenpick Hotel Deira to be re-certified, reaching 90% of…

The MENA operation of global advertising, marketing and communications company Omnicom Media Group (OMG) has joined hands with INJAZ UAE, a member of Junior Achievement Worldwide, to support its delivery of key entrepreneurial and work-readiness programs. These will reach 10,000 students in the Emirates this year.

Omnicom Media Group MENA and INJAZ UAE will work together to support today's Emirati youth by investing in the development of their professional future. This is…

Experts from a panel discussing the costs of green buildings and implementing environmentally friendly building measures, agreed that there should be incentives in place to encourage businesses and individuals to be more active in helping the UAE to reduce its carbon footprint.

Etihad Airways, the national airline of the United Arab Emirates, has made a donation to two social welfare organisations in Kathmandu as part of its corporate social responsibility (CSR) program in Nepal.

The Emirate of Dubai is becoming a low… 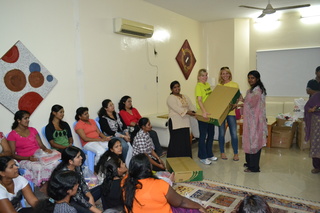