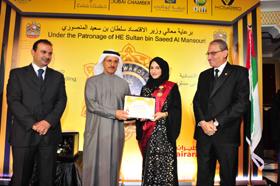 Du has been choosen by the Board of Trustees at Tatweej – Excellence Awards Academy and the Arab Organisation for Social Responsibility as one of the pioneering institutions in the Arab World, in terms of social responsibility.
Hala Badri, Executive Vice President, Brand and Communications, Du, received the honour on behalf of the company at the 7th Prestigious Tatweej Ceremony, held under the patronage and in the presence of H.E. Eng. Sultan Bin Saeed Al Mansouri, Minister of Economy in the United Arab Emirates. Also present at the event was Pierre Moukarzel, President of Tatweej – Excellence Awards Academy, as well as other prominent official public figures and members of Du’s executive management.
During the ceremony, Badri received the Official Scarf Golden Medallion, in addition to the Official Excellence Certificate signed by the Tatweej Academy Board of Trustees.
“Receiving this prestigious honour is the culmination of 8 years of dedication towards and contributions to our community, from everyone within du,” said Badri. “It is an honour to be recognised as one of the region’s leading companies in this field. Our commitment to the community we serve is inspired by the generosity and vision of the UAE leadership, who have set the precedent for social responsibility. All that we do is to support their vision for the nation, and to add life to the lives of those around us all.”
Last year, Du released its second Sustainable Development Report, for which it earned a B+ rating from the Global Reporting Initiative (GRI). The Sustainable Development Report, which covers Du’s initiatives in 2012, conforms to the GRI G3.1 guidelines of the United Nations Global Compact, of which Du has been a member since 2008.
The company is one of only nine corporate entities in the UAE to have received their GRI certification during the 2012 reporting cycle. The report was validated by a third party, Arabic CSR Network, prior to being sent to GRI for certification. Thanks to its B+ rating achievement, Du has emerged as the highest-rated telecommunications company in the UAE, the Middle East and Africa for the 2012 reporting cycle.
Du has also twice received the CSR Label from Dubai Chamber, in recognition of its CSR efforts and for giving back to the community it serve.